Members of 50 Cent’s entourage reportedly pistol-whipped a jeweler and stole $250K worth of goods.

Robert Marin, the owner of LAX jewelry in Los Angeles, claims members of 50 Cent‘s crew assaulted him and stole a watch and chain, worth $250K, that he was planning on selling to 50. It all went down in Vegas on the night of the Mayweather Pacquiao fight, as Marin traveled to Sin City to sell 50 the bling.

He met with 50 at Drai nightclub, where they negotiated a price (250 large), and he spent much of the night celebrating with 50 and his entourage. Marin then claims that 50 & co. invited him back to Mayweather’s gym, where the party would continue.

When they arrived, though, 50 was nowhere to be seen. Things quickly got ugly, as he was then pistol-whipped by two of 50’s crew members and robbed of his jewelry. How he got out of Mayweather’s compound to the Las Vegas PD, who are looking into the case, is still unknown.

Fif’s lawyer, Scott Leemon, has already denied the allegations: “On behalf of I can adamantly deny that he or his security had anything to do with these baseless and false allegations.”

OVER 1 BILLION STREAMS FOR DRAKE
Comments are Off 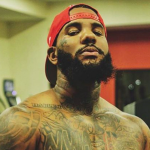