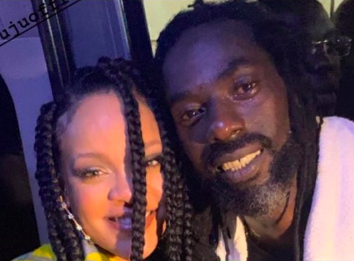 Rihanna was spotted partying at Buju Banton’s star-studded concert in her native country of Barbados over the weekend.

As part of his Long Walk To Freedom Tour, the Dancehall superstar, on Saturday (April 27), performed before a star-studded and sold-out crowd at Barbados Reggae Festival 2019, which was held at the Kensington Oval in Bridgetown.

Rihanna, who was appointed an ambassador to promote education, tourism, and investment on the Caribbean island, was spotted in the VVIP section dancing to Banton’s smash hit singles in the presence of Prime Minister Mia Mottley and Attorney General Dale Marshall. The 31-year-old pop star was also joined by the Chairman of the Barbados Broadcasting Authority Dr. Allyson Leacock, who was quickly followed by the CEO of the National Cultural Foundation, Carol Roberts.

While Rihanna did not hit the stage, Banton stellar performance was enough to entertain the patrons with the likes of guest entertainers Wayne Wonder, Agent Sasco, Spragga Benz and Buggy Nhakente.

After watching Buju Banton in action, Rihanna caught up with man-of-the-moment backstage and posed for photographs with the singer before leaving the venue.

Rihanna is currently working on a new Reggae/Dancehall album which will reportedly feature a collaboration with Buju Banton. The Bajan pop star, in 2017, registered a song titled “Phatt” with the Jamaican artist, whose given name is Mark Anthony Myrie, credited as a writer.

This is Buju Banton’s fourth performance since the Jamaican singer was released from prison in December after serving seven years for drug-related charges. Long Walk To Freedom Tour, which kicked-off in his home country of Jamaica in March has also seen him perform in the Bahamas and Trinidad and Tobago.

Buju Banton is scheduled to appear in Suriname on May 4, Grenada on May 11 and the British Virgin Islands on June 15 and this year’s staging of SummerJam Festival in Cologne, Germany on July 16. He is also prepared to join a strong line-up including Smokey Robinson, Popcaan, French Montana, and Davido at St Kitts Music Festival, which will take place from June 26 to 30.