The Usain Bolt v Justin Gatlin re-match is on after both men dominated their semi-finals to charge into Thursday’s 200m final.

Bolt, looking to retain his other individual sprint title after that extraordinary 100m victory here in the Bird’s Nest, looked to be saving his strength for the next showdown as he eased off in 19.95 seconds.

Gatlin, comfortably the fastest man in the world this year over 200m, as he was over 100m, ran a controlled 19.87 as he seeks revenge for his shock defeat on Sunday night.

Britain’s talented youngster Zharnel Hughes, who trains with Bolt in Jamaica, remains a shot for the podium as he won the first of the three semi-finals in 20.14.

Gatlin, twice banned for doping, has run more than two tenths of a second faster than any other man in the field this year, and almost half a second quicker than Bolt.

The Jamaican holds the world record at 19.19 but has neither the times this summer nor the races, a pelvic injury restricting his season, and he was solid rather than spectacular round the bend.

But transitioning into the straight he was able to open a two-metre lead, and could coast the final 20m to save as much as possible for the battle ahead.

“I’m a bit tired as expected but just trying to get through these rounds,” Bolt told BBC Sport.

“Right now I’m feeling OK. I didn’t run a hard corner but I’m trying to preserve as much as possible for the final. The 200m is my best event.”

Gatlin is desperate to take something away from the championships, having arrived as clear favourite to win back the 100m and 200m world titles he first won in Helsinki a decade ago.

And the controversial 33-year-old got out well to dominate the second semi-final and stay on track for another head-to-head with his Jamaican nemesis.

“I didn’t know I was running that fast,” Gatlin said. “Hopefully I’ll put more energy into the finals and come out on top.” 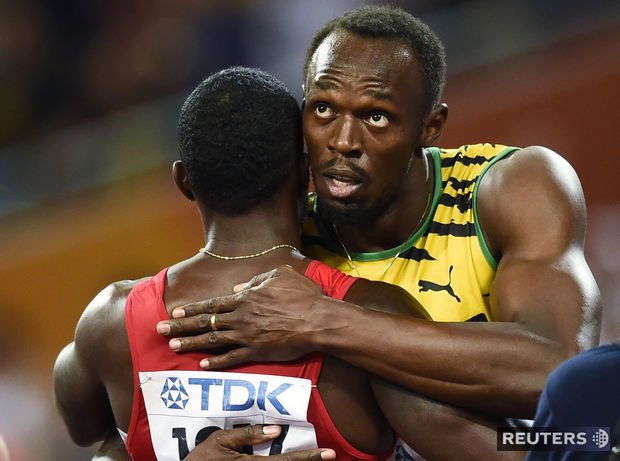